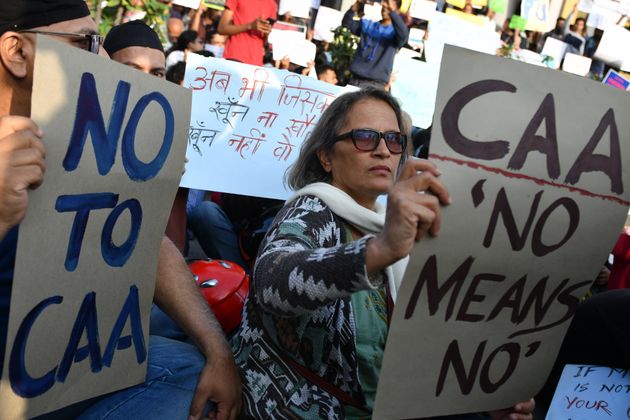 Protesters during a demonstration against the new citizenship law at the Town Hall in Bangalore on December 22, 2019.

In a tweet, Singh said the CAA “purposely discriminates Muslims and other minority communities.” Terming it “wrong”, he said governments should work to unite people and not divide them.

The Indian government’s new Citizenship Amendment Law purposely discriminates Muslims & other minority communities. It is wrong & should be denounced.

At a time of rising hate & polarization, governments should work to unite people, not divide them.#CitizenshipAmendmentAct

Democratic presidential contender Pete Buttigieg had also expressed concern on Tuesday over the political detentions and communication blackout in India. In a tweet, he said that these steps taken by the government could threaten India’s longstanding democratic traditions.

India is an important friend and partner of the United States, which is why I’m concerned about the ongoing political detentions, communications blackouts, and other steps being taken by the government that could threaten its longstanding democratic traditions.

Protests are still being organised against the new citizenship law, which seeks to grant citizenship to Hindu, Sikh, Parsi, Buddhist, Christian and Jain immigrants from Pakistan, Afghanistan and Bangladesh. Combined with the controversial NRC exercise, fears are that this may lead to many Muslims in India being discriminated against and even stripped of their citizenship.

Protests are also being held against police brutality in Delhi and Uttar Pradesh. The Uttar Pradesh police detained at least five minors at the Bijnor Police Cantonment and tortured them over a period of 48 hours before releasing them, HuffPost Indiahad reported.

Uttar Pradesh police have also released photos of alleged suspects behind the violence in the state and served notices to over 60 people for “recovery” for damaged assets.

In Delhi, the police have led a massive crackdown on protesters and responded with tear gas and water cannons. The Delhi police have detained students who were protesting against the crackdown on Muslims in Uttar Pradesh. Students, detained on Monday, told Huffpost India’s Betwa Sharma that the Delhi Police wanted to “black out” reports of violence coming in from Uttar Pradesh.

Women’s rights activist Kavita Krishnan, who has returned from a fact-finding mission in Meerut, told Betwa Sharma that the policemen chased people into narrow lanes and shot them from the back. She said that many of them were not protesters at all. “The people who have died are largely labourers and very very poor workers.”

Delhi’s internet shutdown, as Huffpost India reported earlier, is only the latest in a long string of such actions across the country. In 2019, InternetShutdowns, a shutdown tracked by SFLC.in, has listed 77 Internet shutdowns in India.

Foreign media has also covered the protests against the CAA and the internet shutdown in India (see here and here).

END_OF_DOCUMENT_TOKEN_TO_BE_REPLACED

BusinessLine This week, the idea of a Universal Basic Income (UBI) captured headlines in the UK as a study, presented to Britain’s Labour Party, concluded that the country ought to introduce pilot schemes to test such a system, as part of efforts to tackle hig... END_OF_DOCUMENT_TOKEN_TO_BE_REPLACED

BusinessLine The other day, after reading an article on the importance of having medical insurance, written by one of this paper’s knowledgeable personal finance writers, I was alarmed enough to search for potential medical insurance options available to someo... END_OF_DOCUMENT_TOKEN_TO_BE_REPLACED