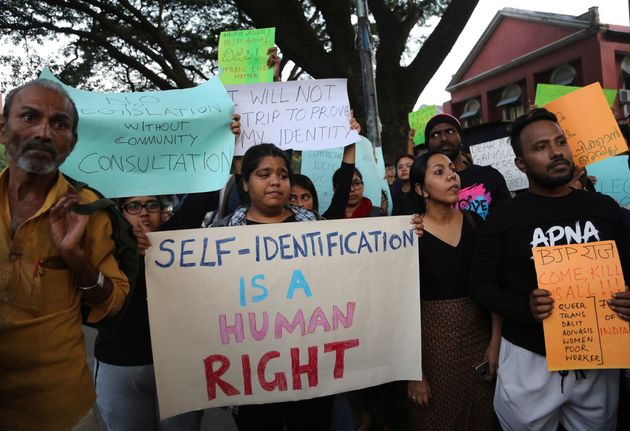 A small group of protestors are gathering outside the Indian High Commission in London on Monday with a goal far larger than their numbers suggest: to hold the Indian government to account over a controversial transgender rights bill.

“They have written a bill without any understanding of what it means to be trans,” Jo Krishnakumar, a 24-year-old from Mumbai currently studying in London, told HuffPost UK.

“We want more people to know about the trans bill and hopefully try to put enough pressure on the government of India and let them know people are watching.”

The object of Krishnakumar’s ire is the Transgender Persons (Protection of Rights) Bill, which critics say fails drastically to live up to its name and actually discriminates against and endangers those it claims to protect.

The bill has been passed in both Houses of the Indian government and is currently awaiting the signature of president Ram Nath Kovind, which will make it the law of the land.

The regressive and oppressive Trans Bill 2019 has passed in both houses. It remains to be signed by the President before it becomes an act.#StopTransBill2019

According to the country’s 2011 census, there are about half a million transgender people in India, though campaigners say the number is much higher.

In 2014, the Supreme Court of India passed a landmark ruling which declared transgender people as a “third gender” and affirmed their equal rights under the country’s constitution.

It also gave them the right to identify as male, female or third-gender without the need to undergo gender reassignment surgery.

Krishnakumar described the Supreme Court ruling as “a really good judgment” on “how trans people should be treated even in public policy”.

“But this bill goes against all of that so it’s technically illegal,” they added.

The bill’s stated objective is to protect the rights of trans people, but a number of provisions within it actually create a legal system in which they are effectively second-class citizens.

“There’s a very clear dehumanisation happening in just that one clause.”

In July last year, Human Rights Watch asked that the government ensure the bill follows the 2014 Supreme Court ruling, saying “its language could be interpreted to mean transgender people are required to have certain surgeries before legally changing their gender”.

The new bill states transgender people must apply using the sex they were assigned at birth unless they have undergone sex reassignment surgery, and can provide proof. It is a drastic procedure that not all wish to go through.

A person who identifies as a trans man, for example, but does not wish to undergo surgery is not able to apply for an identity card as a male, even though Aadhaar is “de facto mandatory for bank accounts, SIM cards, and school enrolment”, according to a study by consulting firm Dalberg.

Meera Sanghamitra, a transgender woman and activist, told Reuters last December the current bill would make life more difficult for the community, especially by refusing the right to self-determine gender.

The national campaign to #StopTransBill2019 is one of ensuring basic civil, citizenship and constitutional rights and freedoms. All democratic forces across India must join the struggle and demand @rashtrapatibhvn
to refrain from signing the Bill and refer it back to Parliament.

At midday on Monday, Krishnakumar joined a protest outside the Indian High Commission in Aldwych, London.

“What we are trying to do is amplify the voices of the Indian diaspora and trans people outside of India,” they said.

END_OF_DOCUMENT_TOKEN_TO_BE_REPLACED

By Daniel Gros   Central banks have a problem: Growth in much of the world is accelerating, but inflation has failed to take off. Of course, for most people, growth without inflation is the ideal combination. But central banks have set the goal of achieving an... END_OF_DOCUMENT_TOKEN_TO_BE_REPLACED

Cities must be geared for industrial transition

BusinessLine Finance Minister Nirmala Sitharaman’s effort to blame the preference for using Ola and Uber for the slowdown in the economy received much flak from social media, and not entirely without reason. The slowdown is clearly visible in sectors of the au... END_OF_DOCUMENT_TOKEN_TO_BE_REPLACED