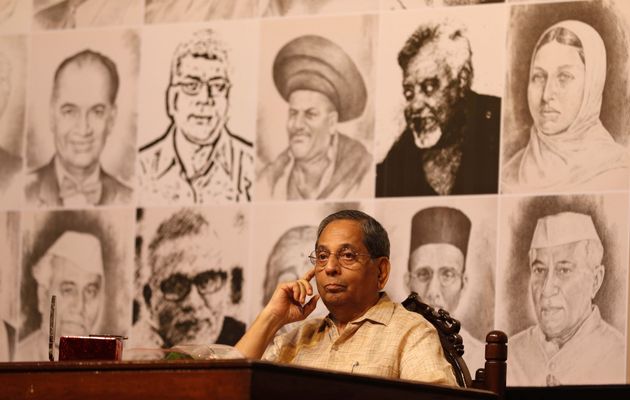 NEW DELHI—Barely three months after he wrote in his latest book about the Ayodhya title suit that evidence was in favour of the Muslims but an amicable and out of court settlement should be pursued in the matter, former Union Home Secretary Madhav Godbole now says he accepts the Supreme Court decision.

“According to me, if this is the way it was to be decided, it should have been decided long ago,” Godbole told HuffPost India on November 9, 2019, the day the Supreme Court verdict was delivered.

Explaining why he said that, the retired IAS officer said, “For example, in 1993, the then Prime Minister Narasimha Rao’s time, when I was Home Secretary in the Government of India, a reference was made to the Supreme Court under Article 143 of the constitution to ask for an advisory opinion of the Supreme Court for a one line reference. And that reference was about whether there was a Hindu structure under the mosque and the Supreme Court had refused to answer this question saying that we respectfully return this reference made by the President of India.”

Godbole felt the Ayodhya title suit would not have become so “complicated” if the court had decided earlier. “In today’s decision, they have basically accepted the fact that there was a temple underneath on the basis of ASI report. That ASI report could have been made available to the Supreme Court even at that time. So therefore, finality could have come much earlier if the Supreme Court could have taken a decision to advise the President at that time, but they did not. And therefore, unnecessarily this issue got further complicated over the last few years,” he said.

In his most recent book on the issue ‘The Babri Masjid Ram Mandir Dilemma: An Acid Test for India’s Constitution’, which was released in August this year, Gokhale wrote, “And as far as I can see, based on evidence, decision in the suit would have inevitably gone in favour of the Muslims, except for the outer courtyard around the mosque in which the Ram Chabutra and Sita-Ki-Rasoi were located. But, clearly, such a verdict would not have been acceptable to a section of the majority community. We have seen the storm which erupted over the Supreme Court decision in the Shah bano case in the mid 1980s and the Sabarimala case in 2018. In the first case, a conservative section of the Muslim community was involved, while in the second a section of Hindus felt aggrieved. Thus, there are limits even to the writ of the highest court in the land, where religious issues are involved. Therefore, it is best that an amicable solution to the Babri dispute is found outside the precincts of the courts of law.”

When asked why he was now changing his position, Godbole said, “Whatever is my view is reflected in that book. I stand by that opinion.”

However, he also added that, “Last few days consistently I have been taking this view that whatever decision is taken by the Supreme Court we must accept that decision. And I myself abide by it. Under the constitution, it is the Supreme Court which has to pronounce the final decision. And whatever is that decision we should all accept it and abide by it.”

Explaining why he wrote in his book that evidence made the case of the Muslim parties stronger in the title suit, Godbole said, “I have explained my reasons in the book…and the reason mentioned was the outer courtyard is the area in which Hindus have been praying for a long time. And the inner part of the Masjid was always occupied or used by the Muslims. At no time Hindus put any claim for the inner parts of the mosque. But the Supreme Court has taken a somewhat different view, from what I could see in the news. So they must have evidence produced before them to that effect.”

When pointed out that some were questioning the “contradiction” in the SC judgement, which effectively gives control of the site where the Babri mosque stood to the Hindus while also terming its demolition illegal, Godbole said that could not be seen as contradictory.

“As far as I understand it, the Supreme Court has held it this way. Destruction of Babri masjid was a criminal act. But whether the title to that land rightly belonged to Muslims or not is a question in which the Supreme Court has gone into and has come to a decision that since there was a non-muslim structure underneath the mosque, the title did not belong to Muslims,” he said.

The former IAS officer, who has authored many books on the issue of secularism in India since his retirement, strangely felt the court should not have gone into the Babri masjid demolition aspect in this judgement at all.

“The fact that demolition of masjid was a criminal act is something which Supreme Court did not need to pronounce at this time; which is all well-known. And for which a separate criminal case is going on in the Lucknow court for a long time,” he said. “In fact, it was under the intervention of the Supreme Court that a specific time limit has been laid down for a decision in that case. And hopefully, now in two-three months time, the criminal case will be decided at least at that level in the next two-three months. Then, of course, the appeal process will begin that’s a separate issue. Therefore, the fact that demolition of Babri masjid was a criminal act was something which was known all the while. They have merely reiterated it. That’s all.”

END_OF_DOCUMENT_TOKEN_TO_BE_REPLACED

ShareTweetShare on Google+Pin on PinterestSend with WhatsApp
5 recommended

END_OF_DOCUMENT_TOKEN_TO_BE_REPLACED

Mangar, a hidden jewel near Delhi

BusinessLine Built in eco-friendly architecture, The Lalit hotel is in tune with the village’s ethos September 19:   There is no hill station in Faridabad, sniggered a friend when I told him I was off to stay at The Lalit’s latest property at Mangar Bani in th... END_OF_DOCUMENT_TOKEN_TO_BE_REPLACED

Statistalk| Banking on the ombudsman